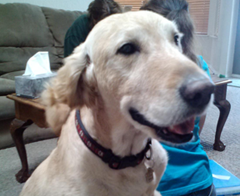 On June 23, 2013, Patty Walters said goodbye to her beloved Golden Retriever, Nelson, who was suffering from cancer that had spread throughout his body.  Nelson was only 8 years old and his passing left a huge hole in Patty’s heart and also in the life of his sweet Golden Retriever companion, Emma.

“Nelson was originally found at a shelter in El Paso by the Golden Retriever Rescue of El Paso (GRREP) and placed in a Las Cruces home.  It ended up being a bad situation for him, and he was at the Animal Haven here in Las Cruces when I went to see him and ultimately adopted him.  They thought he was around 6 at that time and I had him for a (too short) 2 yrs., so he was around 8 when he passed. He was (and Emma still is) in an organization called Therapaws.  It’s a national organization that certifies dogs to go into nursing homes, hospitals & schools (to name a few) to basically just visit with people and brighten their days.  Nelson was the best at it!
When Nelson passed, the head of GRREP, Connie Jimenez, sent me a condolence email and the stray poem [see below].  There really isn’t a separate Golden Retriever Rescue in Las Cruces, folks here just work in adjunct with the one in El Paso. Cassie was a stray in Deming who was picked up by someone there, and that person turned her over to GRREP after unsuccessfully looking for her owner. I became her “foster parent” about three weeks ago, a situation that didn’t last long because I adopted her a week later. I guess you have already figured out that I am a soft touch!
I can’t think of anything to add other than how much I loved him and still miss him every day.  People keep telling me that I should take comfort in the fact that I made the last two years of his life happy ones, but in truth I feel like I was the one who was blessed.” 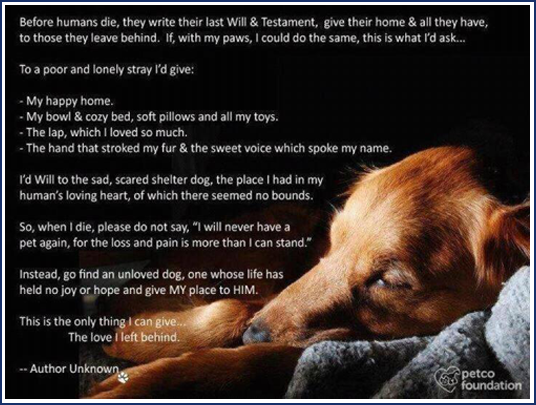