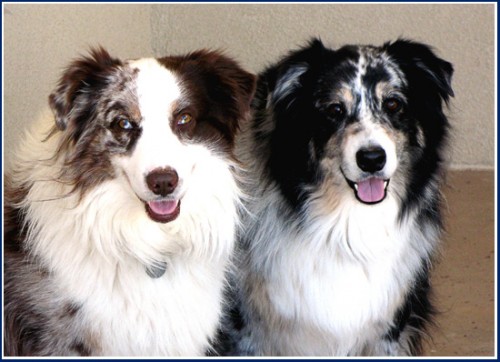 To Sydney, Varmint-Getter Supreme:
“Syd” on the left, with his best bud, “Bob” (also now deceased, sigh).  We found Super Star Sydney as a straggly adolescent pup at a huge dog-frisbee event held annually in Jacksonville, FL.  The 4 month old red merle Aussie immediately stole my heart with his generous and passive nature.  He blossomed into a first-rate coyote and packrat getter when he, fellow dogs, horses, and humans, moved to New Mexico in 2005 (Whew).  Sydney was the kindest dog on earth, and loved by all people.  Quiet and gentle,…but Varmints Beware.  A true Australian Shepherd with a very loving disposition, yet staunch protector of his realm.  His name became “Diaper Dog” as he neared the end of his great life, as he had bouts with several physical problems.  But he never lost his passion for life.  Unfortunately, at 12 years of age, his body could not keep up with his tremendous spirit.  Thank you, Dr. Kane for responding promptly when it became time to say “Goodbye” to a great dog.       ~ Randi Tokar, October 2014